The Capuchin Pan-American Conference will begin on Sunday, May 1, in the Serra de São Pedro, in the interior of São Paulo, Brazil. Approximately 80 friars from all over America, as well as members of the General Government of the Order, will meet to reflect on the proposals made during the virtual meetings that have been held throughout the year.

The meeting will be facilitated by the friars who have already participated in the meetings held on the internet. Besides the presentations, there will be time for group discussions and plenary sharing. The themes will follow the same dynamic that was adopted in the virtual meetings.

Next Wednesday, the friars will leave for Aparecida do Norte, where they will participate in the Holy Mass at 9:00 A.M. The Eucharist celebration will be presided by Cardinal Sean O’Malley, OFMCap, Archbishop of Boston (USA).

After the visit to the Shrine of Our Lady of Aparecida, the friars will return to the Serra de São Pedro, where they will finish the reflections of the meeting.

After undergoing several changes, particularly as a result of the Covid-19 pandemic, the meeting was restructured and held in two stages: virtual and face-to-face. In the first phase, besides those convoked, several other friars were able to participate and send their contributions.

The realization of the face-to-face meeting is the great celebration that the Order of Friars Minor Capuchin hoped to realize in the Americas, in the desire to revive the charism in these lands. 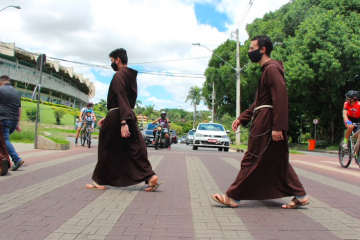