The logo of the meeting

See the detailed description of the logo of the Pan American Meeting of the Order.

The design was made, initially, for the meeting that would take place in Panama. The preparatory commission and the communication team preferred to keep the original design, changing only the location and adding French to the arch surrounding the design. Proposed theme for the First Pan American Capuchin Meeting: the chosen typography, Acadian Runes Regular, reminds us of an indigenous writing. Its purpose is to refer to the first settlers of America, because reviving also means remembering or reliving significant moments from the past. If we want to relive our charism in the Americas, we must look back and find positive elements in our relationship with these people. Pope Francis sets three goals for the Year of Consecrated Life: look back with gratitude to the past, live the present with passion and embrace the future with hope. The subject is written in the three most spoken languages ​​in the Americas and together they form a circle to remember the contribution of several Capuchin friars from all over the world. Pigeon-shaped hands were inspired by the Franciscan shield of arms. First call of attention points to the brothers who follow in the footsteps of the beloved Son; They must be the first to promote justice and peace among the people of America. The lines resemble the Panama Canal that connects the Atlantic to the Pacific. Consequently, the Capuchin younger brothers are also invited to be men who, through the testimony of the brotherhood, promote unity among the people. The colorful lines represent all the people in America. The footprints on the map are inspired by the craftsmanship made by the Kuna Indians, called “springs”, and embroidered in various colors. It is part of UNESCO’s cultural heritage.

The most prominent colors are red, blue and white, found on the host’s country flag. 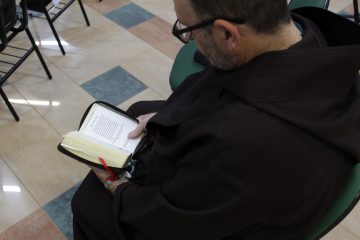