The second official session of the Pan-American Capuchin Conference took place on the 13th, with the delegates of the different circumscriptions.  The theme proposed for this meeting was Initial Formation, based on the statistical data collected, and the reflections of the formators in their own meetings.

Br. Jaime Rey, Vice-Secretary General for Formation, was in charge of presenting the topic. For almost half an hour, he analyzed the data in the light of the Ratio Formationis, the Capuchin Constitutions, and other documents of the Order. Among the most salient points discussed were the issue of friars leaving the Order, formation structures, and the formation of formators.

Then, it was proposed to reflect in groups, by languages, on the structures of formation: the composition of the team and its integration in a formation fraternity that accompanies the different stages of formation. After the group discussions, the brothers presented their conclusive points.

The Minister General, Br. Roberto Genuin, was present from Rome for this session. During the interval, he spoke to the brothers who were following the transmission of the meeting. At the end of the session, he talked to the participants and delegates about the joy of the Pan-American Conference and the expectations that the General Curia has in light of the proposals being made.

Finally, before the farewell, as is now tradition, the brothers sang the song “La Guadalupana”, a tribute to the Virgin Mary, our mother and patroness.

The Pan-American Capuchin Meeting has entered into a new phase. On Monday, October 11th, practically all the friars who carry out a pastoral activity in this immense continent gathered together. Motivated to respond to the Leia mais…

As you well know, the Pan American Capuchin Meeting, which began virtually May 3rd through Zoom meetings, will be concluded in a face-to-face assembly with a group of friars convoked in the city of São Leia mais… 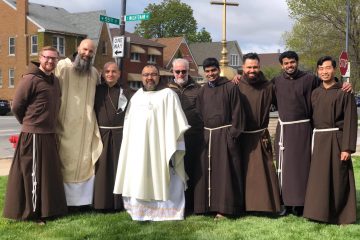 Since the beginning of May we have been celebrating the 1st Pan American Capuchin Meeting in virtual mode. We already had several meetings with an impressive participation of the formandi, the formators, those who work Leia mais…